Be the first to review this product
฿950.00
In stock
Only 1 left
SKU
CHA-23178-X
Add to Wish List Add to Compare
Skip to the end of the images gallery 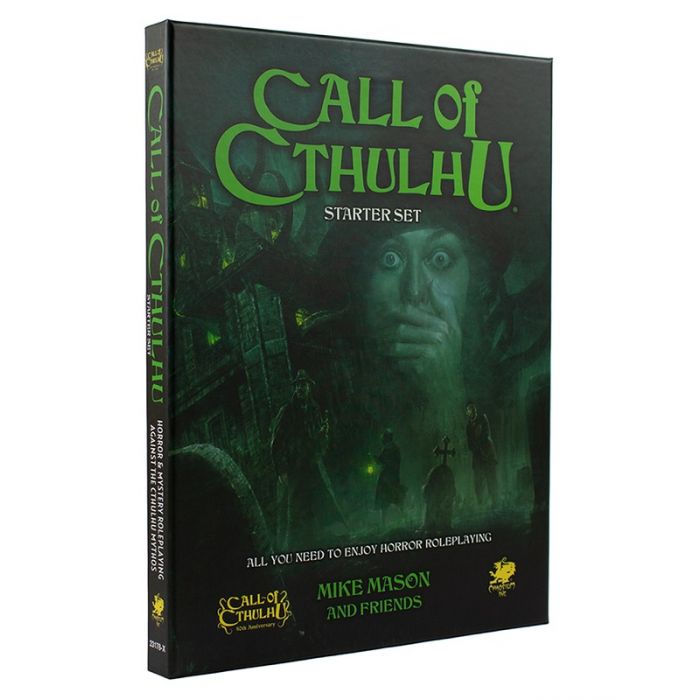 Horror, Mystery and Investigation In A Box!

The Call of Cthulhu Starter Set contains everything you need to play the world’s best roleplaying game of horror, mystery and investigation!

Updated for the 40th Anniversary of Call of Cthulhu

In a roleplaying game, everyone works together in a team, each playing an investigator character. One player runs the game—the Keeper of Arcane Lore—who referees the game and presents the story and adventure plots to the other players.

Dice and the rules of the game determine the success or failure for your character’s actions—all while you are propelled into dramatic and nerve-tingling situations! The emphasis is on having fun.

Three softcover manuals broken into rules and scenarios to guide you in playing Call of Cthulhu. The box also includes all the dice you need to play the game: a D4, D6, D8, D20, Percentile D10, and an extra D10 in a different color for use as a bonus/penalty die.

Learn to play in the best way possible—by playing! The special introduction “Alone Against The Flames”, a solo Call of Cthulhu scenario, teaches you the basic rules of the game and character creation as you find yourself in the rural New England town of Emberhead—but can you escape?

Three scenarios designed for 3, 4 and up to 5 players.

Player aids are an essential component to Call of Cthulhu gameplay. Each scenario has its own collection of maps, notes and player handouts. Each presented in full color, these play aids will enhance your gameplay, and help your players immerse themselves in each of the investigations.