Golden Goblin Games was blessed by Wizards of the Coast with a sneak peek of Dire-Strain Rampage, a Rare card from the upcoming Innistrad: Midnight Hunt set.

The artwork from Darek Zabrocki is a story spotlight that depicts a pack of werewolves setting a city ablaze. In the background, a full moon shines over a manor or a church and we can guess the silhouette of a vampire next to its steeple. 100% Midnight Hunt feeling over here! 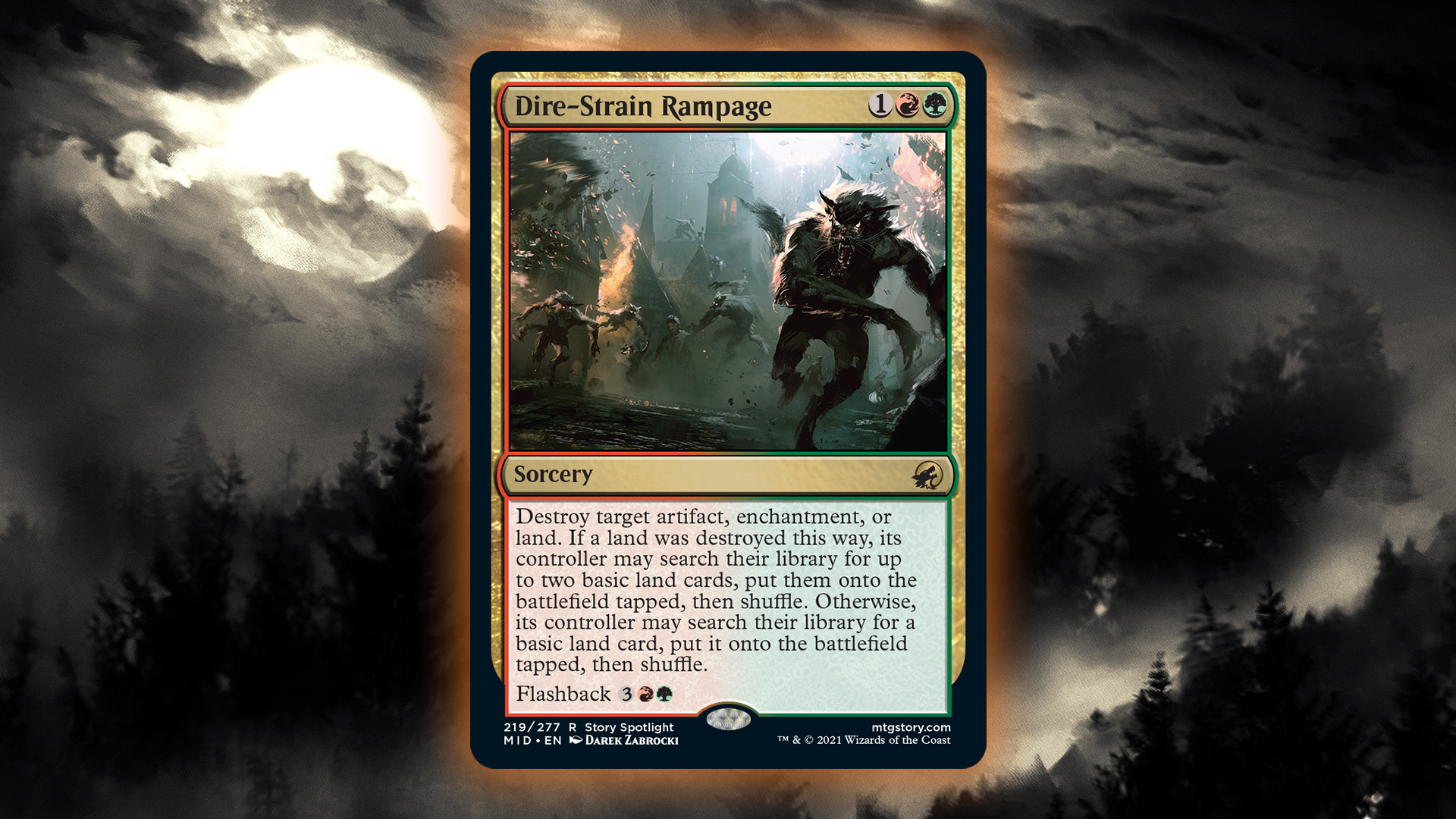 Dire-Strain Rampage is a red/green Sorcery card with a converted mana cost of 3. Let's look at the main text.

The card also has the Flashback keyword with a mana cost of 5, enabling us to play it one last time from our graveyard.

At first glance, a card like Assassin's Trophy (Pioneer) sounds a lot better. It costs only 2 mana instead of 3, is an Instant instead of a Sorcery, and can destroy any permanent while Dire-Strain Rampage can only destroy artifacts, enchantments, or lands (not creatures). However, Assassin's Trophy must target a "permanent an opponent controls".

With Dire-Strain Rampage, we have a very versatile card up our sleeves. We can use it as a removal card against our opponent or as a ramp card by targetting one of our own cards.

As a removal card, it is flexible, allowing us to destroy powerful artifacts, enchantments, or utility lands like Valakut, The Molten pinnacle (Standard) or Field of the Dead (Pioneer). Doing so comes at a cost however as it will increase the mana pool of your opponent.

To ramp our mana, we could destroy a cheap artifact token we control and gain an extra land or destroy one of our basic land to gain 2 basic lands a bit like Roiling Regrowth (Standard). If we already have permanents in play with Landfall abilities like Omnath, Locus of Rage (Commander), it is totally worth the sacrifice.

Don't forget: Dire-Strain Rampage has Flash, so we can use it twice to remove, twice to ramp, or both ways. Not a centerpiece card to build a deck around it, but it is very versatile and can save us a few slots when deckbuilding.

To ramp or to remove? That is the question.

This preview has been provided for free by Wizards of the Coast.

Haven't pre-ordered this horrifying set yet? Wait are you waiting for!