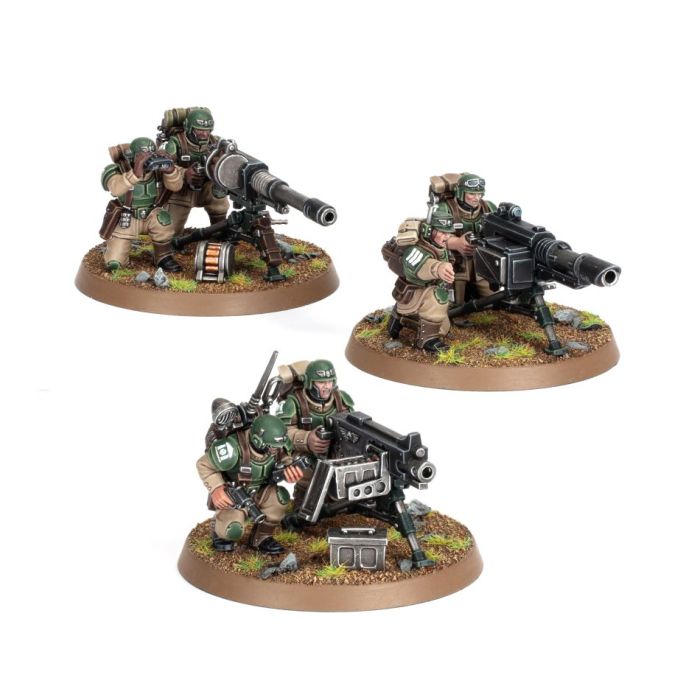 While massed infantry can overwhelm the foe, it often falls to Heavy Weapons Squads to deliver the killing blow. These teams of gun crews swiftly set up their mobile heavy weapons as their comrades advance, providing the firepower to bolster battle lines. With access to an arsenal of portable armaments, they can offer close fire support with adaptable loadouts of precise – or indiscriminate – firepower.

This multipart plastic kit builds three Heavy Weapons Teams – paired infantry soldiers crewing a portable gun. Each team can be armed with your choice of a heavy bolter, missile launcher, mortar, autocannon, or lascannon. The kit includes plenty of cosmetic options to mix things up – extra ammo, seven different heads, a variety of poses, and equipment such as vox-sets and magnoculars for spotters and loaders – so no two teams ever need look alike. These teams can be fielded together as Heavy Weapons Squads, or combined with the Cadian Shock Troops kit to form Infantry Squads with attached Heavy Weapons Teams.

More Information
Reviews
Write Your Own Review
Only registered users can write reviews. Please Sign in or create an account
Related Products
Check items to add to the cart or