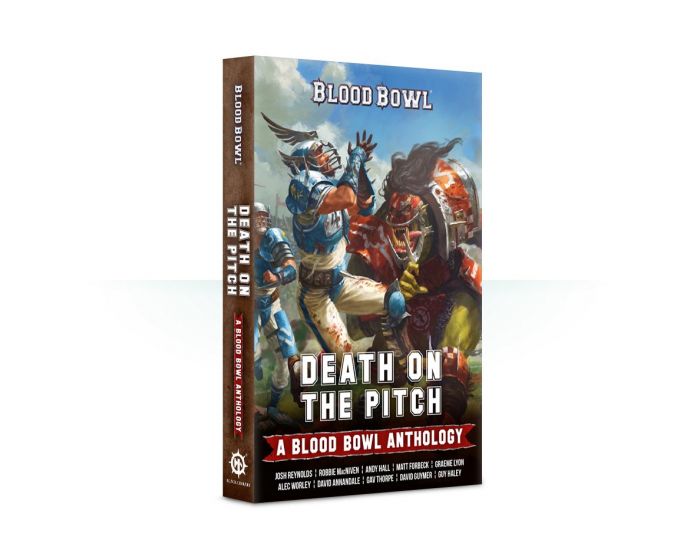 Return to the astrogranite with twelve tales of adventure, excitement and blatant cheating from the Blood Bowl field. From mystery pies to incompetent wizards, and from on-pitch action to off-field intrigue, this anthology has it all!

READ IT BECAUSE
Don't take our word for it – check out these celebrity endorsements.

"It's a collection of Blood Bowl stories of unparalleled excellence." – Jim Johnson
"I'm in some of them." – Bob Bifford
"I'm being paid to say it's good. I'm being paid a lot, so it's VERY good." – Griff Oberwald
"Not enough blood and skulls for my liking. Oh, there are plenty, but there's no such thing as enough." – Lord Borak the Despoiler

DESCRIPTION
Prepare for the brutal, bone-crunching action of the classic fantasy football game – Blood Bowl. A contest of strategy and tactics combined with sheer wanton violence, this may just be the goriest sport in existence. Join roaring spectators as they behold the frenzy of cheating dwarfs, second-rate wizards, homicidal orcs and injured heroes fighting for old glory as they compete for the ultimate bloody victory. Ever wondered what happened to the legendary Bad Bay Hackers? Find out in Matt Forbeck's 'The Hack Attack'. Also included in this rip-roaring anthology are stories by up-and-coming Black Library authors Alex Worley and Robbie MacNiven, as well as established authors Josh Reynolds, Guy Haley, David Guymer, Gav Thorpe, David Annandale and more...