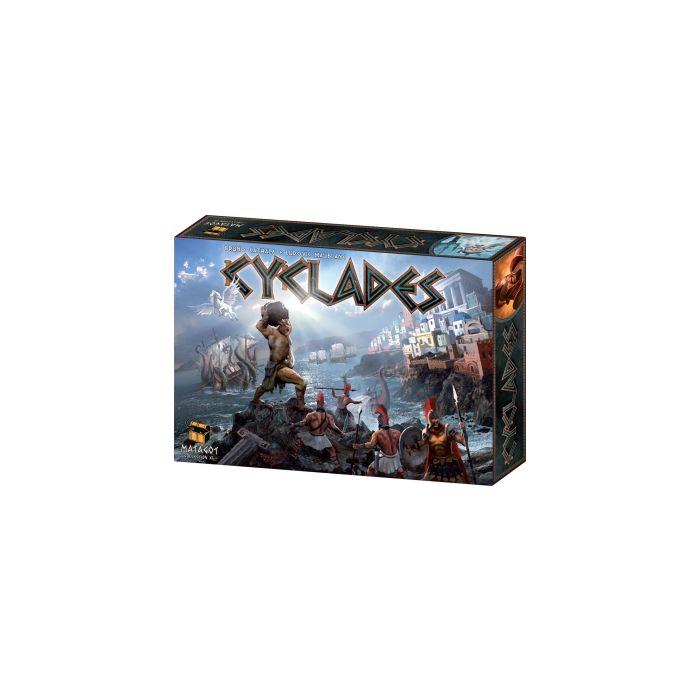 The rise of nations in a land of myth and legend.

Beseech the gods of Olympus and release the most powerful mythical creatures of ancient Greece as you claw your way to the top. Build armies and cities, hire scholars and priests, and be the first to build your metropolis. Only by creating the most magnificent cities of all time will you claim your place as the rightful ruler of the Cyclades!

Each player in Cyclades will lead his people in their conquest of ancient Greece. Each turn, you must beseech the gods for the right to build ships, train soldiers, or hire priests. Recruit the gorgon or the kraken, the minotaur or the harpy, and use their power to bolster your defenses or destroy your foes. Build mighty fortresses and legendary libraries in your quest to create the most impressive metropolis the world has ever seen.

Bruno Cathala and Ludovic Maublanc, the acclaimed designers behind Mr. Jack and Dice Town, present Cyclades, a game of conquest and development in a time of legend. Featuring lush and beautiful art, intricately sculpted plastic figures, and a modular board that scales up to accommodate any number of players, Cyclades will excite and entertain the most demanding fans of strategic and tactical games.