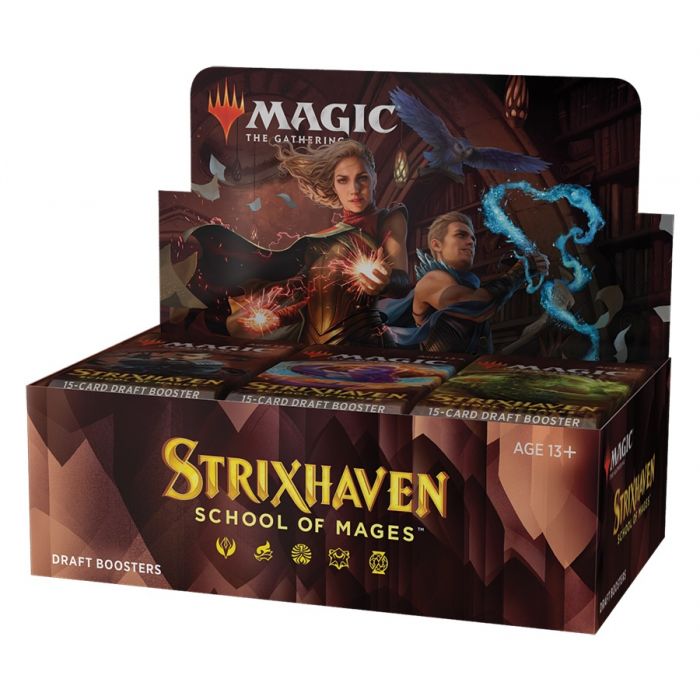 Welcome to Strixhaven, the Multiverse's most prestigious university for the study of magic!

Founded centuries ago by five spellcasting dragons—Strixhaven is divided into five colleges that reflect their founder's magical specialty and distinctive personality.

One Mystical Archive Card in Every Pack

The Library of Strixhaven, also known as the Biblioplex, forms the center of Strixhaven University. Doorless, arch-shaped entrances welcome inquisitive minds into a library filled with impossibly-long hallways, archive chambers tall enough to have their own weather, and even pools and moat-passages that must be crossed by boat.

The most famous feature of Strixhaven's library is the Mystical Archive—a collection of spells from throughout space and time.

Every Strixhaven Draft Booster contains one card from the Mystical Archive—a sorcery or instant with striking art and a special showcase frame.

Learn While You Duel

Strixhaven introduces the learn mechanic, which allows you to either put a Lesson card you own into your hand from outside the game or discard a card to draw one.

Every Strixhaven Draft Booster Pack includes one Lesson card, so you can develop new skills and grow more powerful as you duel.

Strixhaven also introduces cards with the magecraft mechanic. These cards give you special bonuses whenever you cast or copy an instant or sorcery spell, whether it's life gain or a +1/+1 counter.

The best Strixhaven boosters for drafting, one box includes enough packs to draft with up to 12 players. Just add lands and join the battle between colleges, each with their own take on magic.